Take your country with you: social networking abroad

I was an exchange student in 1988/89 and came to a very homogenic culture, DesMoines (Iowa) in Midwestern USA – and you can see I sported a hairdo that proves it. 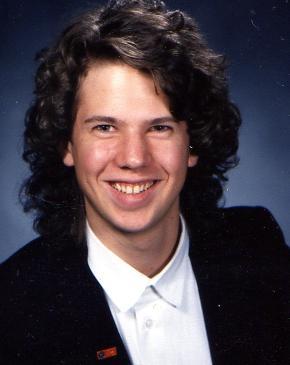 I guess it was fashion at the time

Naturally, nobody there spoke German or had even heard of a difference between West- and East Germany. Long distance telephone calls were very expensive and email, IM, facebook or Skype were still in the far future. That made communicating with family and friends, generally staying in touch with your cultural background quite costly and cumbersome.

But at the same time it forced me to understand the local culture and integrate into the new surroundings and peer groups quickly. Which isn’t a bad thing at all, you learn how crusing up and down Main Street is way cool and that Breakfast Club is more or less a documentary (only with better lines) –  it allows you to truly understand the second culture you are visiting.

Today, young Germans staying abroad can basically get by without this immersion and adaptation. This to me seems is largely due to non-English social networking systems like the German StudiVZ.  I have noticed this phenomenon through our German Au Pair girl staying with us. Her amount of media time spent with German-only social networking, chatting and Skyping is simply staggering. The same goes for all the young Germans she knows here in Sydney. 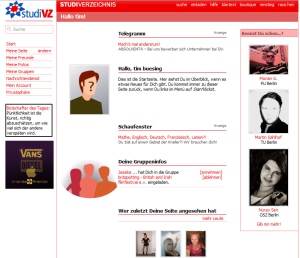 Due to the dominance of facebook-clone “StudiVZ“, most young Germans have become initiated into social networking in their mother tongue. And when German youngsters arrive here in Australia they stick to their favourite social network. I am assuming Japanese youngsters in OZ might hop onto Mixi (for all non-Japanese a decription here), Koreans check CyWorld and holders of UAE passport (Emiratians?) top everyone in their social networking readiness anyhow. It influences how they all make new contacts Down Under, organize their private life and chat on a daily basis. It makes the Germans stay in a little Deutschland-bubble. As an example, wouldn’t you find it odd how someone living in Sydney for 10 months would not have heard that New Zealanders are called Kiwis?

Where I am, there is Germany. I carry my German culture in me.” said Thomas Mann to journalists in 1938 when starting his exile in the USA. I think social networking does so many positive things but weirdly enough when used as an achor to the mothership (as in this facebook/StudiVZ case), it also leads to a lack of cultural understanding and integration into a foreign host country. I am not proposing getting rid of those network ties when travelling and heading straight into a complete Anglosphere, but a little bit of a cross-over between the networks would be advantageous. Maybe after facebook and StudiVZ have stopped bickering in court, a purchase/merger will provide a cross-network user experience?

5 responses to “Take your country with you: social networking abroad”