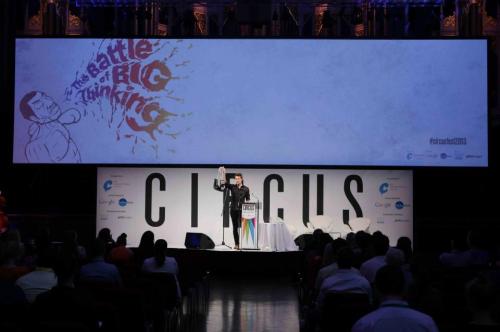 I’ll say it upfront: The Battle of Big Thinking is my kind of stoush. A keynote can sometimes come across as a polished corporate performance, delivered in front of an audience that, while suitably impressed, is leaning back slightly.

Not so with these bouts of the brain. This time it’s personal: every contender has to weigh in, display heart and passion, come out swinging. Punchy lines have to be thrown, flying thick and fast, with the intent to floor the adversaries.

Don’t get me wrong, a keynote can have huge impact and introduce big ideas. But how different is it when you have to convince a room full of judges that you deserve the title belt? Where every big blow reverberates through the audience (in tweets) and entices the delegates to quote you and create their own jeers from the sidelines? Have a taste of these:

And the author of the last line, Farrah Bostic, clinched the title. She passionately appealed for more respect for women in marketing, as colleagues as well as consumers. And displayed the heart of a battle-hardened thinker. One tweeter commented: “Battle of Big Thinking – it’s like TED talks meet cage fighting.”

As I said, my kind of stoush.

I am lucky enough to be invited to act as commentator, Tweeter, blogger and (buzzword) ‘content curator’ of AWARD’s Circus 2013. This is my summary of Day One, the Keynote speakers.

“Going through your Instagrams is the new way of note taking.” There, I’ve said it. Or better: I’ve borrowed this thought from a tweet that was sent during Circus. Which nicely illustrates my point: What good is a creative festival if you aren’t in discourse with the other attendees? Luckily, Circus delivers that in spades. And interactivity is not confined to the electronic space.

As Anthony Freedman encouraged us to ‘step outside the industry for a while’, Craig Davis went further and had us all take off our shoes and stand up to get a true sense of grounding. Master of Ceremony Joe Talcott made us search for post it notes, detect the hoaxes within the speakers’ CVs and kept our minds open for the next big thought. Like The Rise of Conscious Capitalism. Or Facebook’s Speed to Create and China’s Speed to Market. Brands’ Open APIs and Shops as Open Theatres. Or Coca-Cola’s Liquid and Linked Ideas.

Jonathan Mildenhall’s guided tour through Coca-Cola’s Content 2020 strategy was indeed a big opener of Day One, expertly delivered by voice and illustrated by hand. And apart from the strong belief in a new, dynamic way of storytelling that permeates Jonathan’s work, his keynote taught me the wonderful word of ‘womanity‘. I am not 100% sure about its semantic difference to ‘womanhood’. But Jon used it to describe Madonna’s ‘fierce, independent womanity’. And if there is one woman that deserves a new gender expression it’s Madonna.

Speaking of semantics, Joe Talcott rounded up the day nicely with a plea to reconsider one of the most popular hashtags: #Fail and its grandiose cousin #EpicFail. Maybe next time replace it with #thanksforthelesson, or #don’tgiveup or #learn. Now there’s a thought to borrow.

Day Two’s program can be found on the Circus website.