I attended TEDxSydney  on Saturday which had moved to iconic Sydney Opera House as a venue. This year’s 2,200 attendees were deliciously catered for by Matt Moran and the grass roots movement ‘Grow it local’.
Telstra, Qantas, Samsung, U of Syd and NAB were some of the main sponsors, lending a more corporate component. At the same time the conference was still retaining a lot of the activism and volunteering spirit. 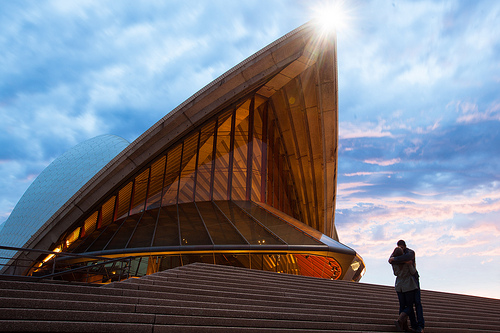 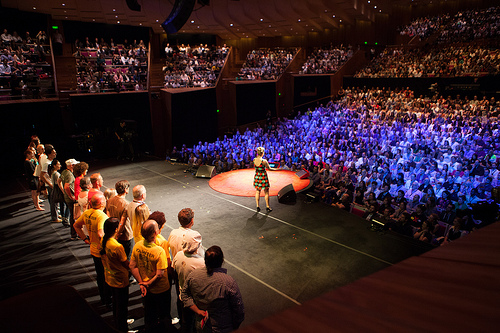 The above photos are posted under CreativeCommons from TEDxSydney’s flickr stream.

Here are my personal favourites from the films they played in between:

Everything is a Remix

Last week I had the pleasure of listening to and chatting with Kirby Ferguson, filmmaker and author of the 4-parts “Everything Is A Remix“.

Kirby also appeared as a TED speaker on the subject with his talk ‘Embrace the Remix‘.

Kirby talked about his analysis of creative work, which falls into three categories of either copying, transforming or recombining existing elements. Many legends of music like Bob Dylan and Led Zeppelin more or less admit to using existing songs and melodies in their work. It’s how they learned to find their own style. Stand up comedian Richard Pryor taxed the time it took him to find his own voice to about 30 years. Similarly scientific break throughs aren’t leaps of imagination but often a transformation or recombination of previous knowledge and tools. Kirby took Henry Ford as the example of combining conveyor belt and other elements of mass production and deploying it for the automobile (which he didn’t invent).

What resonated with me was that seemingly original ideas often reveal their influences, and that it is ok to work like that. If we can admit that we are standing on the shoulders of giants, we can relax and keep inventing by copying parts, transforming and recombining them. But preferably avoid the pure copying. I think too often discussions in advertising are about the copying bit (in the sense of plagiarism) and used as a sledgehammer to cristicise and put down any transformative and re-combinatory (if that’s a word) aspect of the idea.

When I caught up with Kirby afterwards he freely talked about the influences on his work like the CBC documentary ‘RIP – A Remix Manifesto‘, ‘This American Life‘ or work by BBC’s Adam Curtis.

Kirby’s talk was organised by the resourceful guys from Portable as part of their Portable Talk series. I have already signed up for their next event with one of the makers behind ‘LookBook.nu’, Yuri Lee.

In case you haven’t noticed this site yet, it must be one of the most influential in terms of online fashion and (what they call) ‘Collective Fashion Consciousness’. Think of it as a ‘Sartorialist’ times 1,000. Book your front row seat here.

Having attended the inspirational marathon that is TEDx Sydney I had planned to write a personal summary of impressions and thoughts. Rather than dwelling on why I haven’t written it yet – because it certainly wasn’t due to a lack of quality talks on stage and chats in the break – I am taking the easy way out. Here is a link to Simon Bloomfield’s extensive post on the STW Nextness blog. And be sure to check out the TED Ed initiative as presented by founder Chris Anderson.

You can hopefully catch up soon with videos of the TEDx talks on their YouTube channel. Given that my ex-colleague Darryl Nichols might be speaking at TEDx Sydney 2013 about his awesome Garage Sale Trail project, I am already mentally lining up for next year.